Can’t explain what comes over me when we leave Islay. Who woulda thunk? I love this little island though I wonder if I could live here.

Met a gal born and raised there. Never left, even as far as Edinburgh! Really? But I kinda get it, The community is family. There are only about 1000 on the whole island and they take care of each other. When the power went off yesterday, Ron explained, they would survive off each other. They would have done a massive BBQ and helped each other. 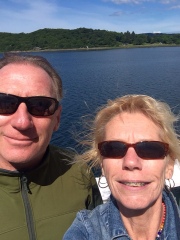 The blog will be a little short as we traveled today. Although we passed many cute towns and lochs, Randy was in driving mode, so stopping was not an option.

Managed to go back to the Crinan Canal. We had a great lunch and brew there and waited for ships….which did not arrive, unlike last year where they backed up for hour. The Crinan Canal has 15 locks and is crossed by seven bridges, six swing bridges and a retractable bridge. Stone for the 15 locks was brought from Mull, the Isle of Arran. 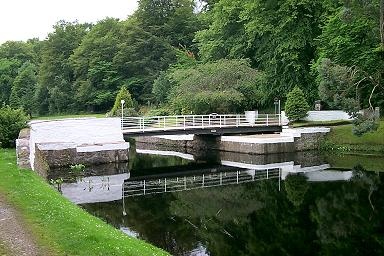 The retractable bridge at Lock 11 replaced the original swing bridge in 1900. It is operated by a rotating handle and a cogged wheel which causes the bridge deck to roll forwards and backwards on rails and comes to rest across the lock chamber. The canal has towpaths on both sides from Ardrishaig to Crinan Bridge and horses assisted unpowered craft until 1959.

Nowadays you will see barmaids and waiters come out from their jobs to lift them. Randy so wanted to be one!

We arrived in Glasgow and deposited the car. Our hotel is literally 15 steps to the airport, so we went there for drinks since the hotel was sort of boring.

Never in my life would have I thought we would be sitting in the airport enjoying the World Cup, it was sorta fun knowing we didn’t have to check bags and hurry along. We also, believe it or not, found a small grocery store in the airport!

Off to Paris in morning to see Rapahel. I’m excited to see him, his town and his parents! Tomorrow’s blog will be much more exciting!

This entry was posted in Uncategorized. Bookmark the permalink.